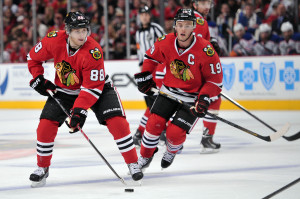 Patrick Kane (left) and Jonathan Toews are both All-Star staples in a stacked starting lineup that will continue to lead the Hawks to the playoffs.

I will admit that the Blackhawks ended the 2013-14 season on a rather disappointing and heartbreaking note by losing to the Los Angeles Kings in a win or go home matchup in the Western Conference Finals. As I listened to the radio broadcast that night, it seemed as if the Hawks were destined to emerge victorious, yet came up just one goal short to the eventual Stanley Cup Champions. However, they have displayed a powerful resurgence during the first eight games of the 2014-15 regular season and are once again projected to be a serious contender for another Stanley Cup Championship. To begin, the Hawks, with the exception of Brandon Bollig, kept an identical roster heading into the season, meaning that each pivotal piece to the team is now able to produce valuable and playoff-worthy results throughout the year. Patrick Kane and Jonathan Toews also received mega-contact extensions, each totaling $84 million over eight years. The stars that are a necessity to this team are here to stay for the long-run, hopefully meaning more successful seasons for Chicago’s winningest team over the past six years. Recently, goalie Corey Crawford went down with ann upper-body injury, yet this impediment has not stopped the Hawks as far as the position goes. Backup goalie Antti Raanta, who posted a 13-5-4 record as a rookie last season, has picked up the slack along with rookie Scott Darling who held the Philadelphia Flyers to only one goal on 33 saves to help the Hawks break out of a two-game losing streak. Other players like Brandon Saad and newly-acquired Kris Versteeg have also been living up to their expectations, allowing the Blackhawks to continue to be a powerhouse in the Western Conference. As for a prediction, I believe that the Blackhawks will win at least 45 games and will earn a one through four seed in the playoffs. NBC as well as other sources project the Hawks to finish second in the Central Division to the St. Louis Blues, yet as a true Blackhawks fan, I cannot think about living in a world where the Hawks do not prevail with the division title. A Stanley Cup win would put the icing on the cake, but I just could not see this feat be achieved. A Conference Finals appearance is much more realistic to me and I have put my trust into the fact that the Chicago Blackhawks will once again be a force to be reckoned with during this 2014-15 season. After a promising start of 5-2-1, this allows me to further believe that another playoff appearance at the least will come to the Blackhawks this season.