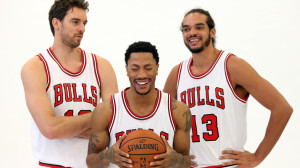 The Bulls now possess a so-called “Big-3” of their own, which will assist them in finding their way back to the later rounds of the playoffs, including the NBA Finals.

After their brief and quite disappointing end to last season, the Chicago Bulls have certainly opened my eyes and made me rethink their chances of a championship in the upcoming 2015 season. I still cannot picture a division championship due to the talent that the Cleveland Cavaliers possess, yet a playoff seed in the top four is a high possibility. To begin, Derrick Rose is finally ready to play and is experiencing no problems that are injury-related. He recently helped the U.S, win a gold medal in the FIBA Basketball Tournament and performed at a competitive level. He averaged nearly five points and three assists a game for Team USA in limited time off of the bench. If Rose is able to play at least 60 games this season, he could fill an enormous void at the point guard position that had been in existence since he tore his ACL back in April of 2012. Recently acquired this offseason, Pau Gasol has looked stellar in practice this year and is already an upgrade from Carlos Boozer, who was released back in June. Gasol played in 60 games with the Los Angeles Lakers last season and averaged over 17 points a games along with nearly 10 rebounds per game. He has already been named a starter for the upcoming season and these numbers help show why he truly deserves it. Coming off of a career season in which he won NBA Defensive Player of the Year honors, Joakim Noah is expected to have another superb season for the Bulls at power forward/center. Noah averaged a double-double in points scored and rebounds for the second straight season in 2013 and he is projected to average over 12 points per game and 12 rebounds per game this season. Doug McDermott and Aaron Brooks are the two X-Factors for the 2014-15 season. Brooks, at one point, had been a premier point guard in the NBA who averaged nearly 20 points per game along with making the most three-point shots in the NBA in 2009-10. He will back up Derrick Rose and could hit some valuable three-point shots at clutch moments. At Creighton, Doug McDermott averaged 21.7 points per game during his entire four-year career and set a high with 26.7 points averaged during his senior year. He is a three-point threat and has done well so far in the NBA Summer League. He was named Player of the Month and averaged over 20 points per game for the Summer League. As a team, I expect the Bulls to win 50-55 games this season, which means that they will have a respectable seed come playoff time. I am not ready to say that they will walk away with winning the NBA Finals, but I believe they will at least be able to make it past the first round of the playoffs. The regular season begins on October 29th against the New York Knicks, so make sure to check it out!