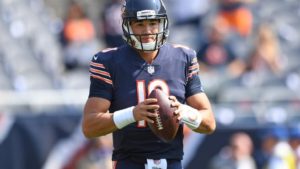 By drafting Mitchell Trubisky last year, the Bears are effectively out of the running in this year’s strong quarterback class. Will the team be missing out?

Following the end of the catastrophic Jay Cutler era, a near-decade in which the Chicago Bears earned a postseason berth on one occasion, the team was desperate for a permanent solution to their quarterback troubles. From a historical perspective, in the Bears ninety-five years as a franchise, the team has constantly failed in their quest to develop a superstar quarterback. Although some could make a case for Sid Luckman, who played for the team during the World War II era, the game of football, at the time, differed completely.

Therefore, the end of the Cutler era, one that saw Cutler marred by injuries, and a mediocre carousel at the quarterback position, it was time to make a drastic change. The Bears realized that they needed a franchise quarterback, one they could polish themselves, and with other offensive weapons, one who could lead the team back to the playoffs.  After years of anguish and disappointment, however, desperation began to sink in. Instead of truly gauging the quarterback market at both the professional and collegiate level, the Bears decided to act impulsively, thereby drafting Mitchell Trubisky in the 2017 NFL Draft.

Although Trubisky was, at the time, the consensus number one quarterback amongst the draft class, that does not necessarily equate to results. Case in point, Trubisky recorded a Passing Rating under 80.0 in his rookie year, while throwing just as many interceptions as touchdowns. In comparison, Deshaun Watson, who was also drafted in the same round as Trubisky, threw for nineteen touchdowns, while posting a Passing Rating of 103.0. What makes Watson’s performance even more impressive, is that it took him only seven games to accomplish these feats. Trubisky, meanwhile, starred in twelve games.

Due to their impulsive decision. the Bears chose Mitchell Trubisky to be their next franchise quarterback. Although he has time to develop, his inaugural season in the league did not go as planned. That has Bears fans worried, as Trubisky was supposed to burst onto the scene, similar to Watson’s case, not perform at an average level.

Interestingly enough, though, is that if Trubisky was apart of this year’s quarterback class in the NFL Draft, he would not top the ranks; in fact, he would sit near the bottom of the totem pole. Amongst the likes of Sam Darnold, Josh Allen, Josh Rosen, and Baker Mayfield, all of whom are highly touted individuals, Trubisky would fail to size up to their skill level. Comparing college performance and overall skillset, Trubisky is undoubtedly the worst player of this bunch.

Therefore, due to the subsequent end of the Jay Cutler era, the Bears felt that they needed a replacement right away, and without hesitation. Instead of considering alternative options, such as implementing a bridge quarterback who could handle the reins for one season, the team decided to “go big or go home.” Although the aforementioned strategy was used by numerous teams last season, the Bears scoffed at the idea of another year of mediocrity. And because of this choice, the team will be unable to take advantage of one of the most talented quarterback classes in recent memory.

On Draft Day, while teams like the Browns, Giants, and Jets will be awaiting their chance to claim their next franchise quarterback, the Bears will be looking to draft someone to aid Mitchell Trubisky on offense. Both Quenton Nelson, an offensive lineman, and Calvin Ridley, a wide receiver, have been linked to the team. Nelson and Ridley both bring advanced talents to the table. Whether or not they come to Chicago does not matter, as they will both contribute immensely at the NFL level.

Unfortunately, however, these are not the two players in which the Bears should be pursuing. Due to the team’s 2017 Draft Day failure, one in which an impulsive move was made to snatch the next franchise quarterback, the Bears are unable to look upon this year’s extremely talented draft class. The team’s rash and urgent selection last season will end up costing them the chance for a better option at quarterback. Simply put, due to the Bears rush to acquire a popular quarterback, the team is evidently missing out on this year’s talented draft class. Their hurried decision has made it more difficult for them to justify drafting Trubisky, and that could cost the Bears faithful more playoff appearances in the future.