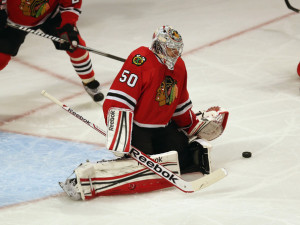 Chicago Blackhawks goalie Corey Crawford makes an effort to stop this goal from scoring in the 2014 Western Conference Finals.

Even though the Blackhawks were eliminated in a Game 7 loss to the Los Angeles Kings in the Western Conference Finals, I still maintain the belief that this overall season was successful for the franchise. It is quite a daunting and difficult task when trying to repeat as Stanley Cup Champions and the Hawks were extremely close to conquering that challenge. Keep in mind that the last time a team won two Stanley Cups in a row was the 1997-98 Detroit Red Wings and since then, many different teams have emerged to win that coveted Stanley Cup. To me, the Hawks had a successful season because they still found ways to win games, overcoming various injuries and the pressure of trying to win consecutive championships. Patrick Kane, Andrew Shaw, Jonathan Toews, and Marian Hossa all suffered injuries that could have stopped the Hawks from reaching the playoffs, yet it seemed as if these injuries made the Hawks stronger and ready to play at any given moment. A 46-win, 107-point season shows utter dominance and determination from a reigning champion whose greatest ally was its extensive fan-base that stretched across the country. After the 2010 season, the Blackhawks skyrocketed in popularity nationally and internationally and the 2013 Stanley Cup victory made those 2010 numbers grow even more. I was an avid follower of the team this season and it was a pleasure to see the team prosper and succeed. The first round of the playoffs truly tested the Hawks and they beat a St. Louis Blues team who had a better regular-season record than the Hawks. The Blues were also a favorite to win the Stanley Cup and the Hawks put that idea to rest. The Minnesota Wild was the next team that stood in the Hawks’ way and although the Wild only obtained 98 points throughout the regular season, the Hawks split the season series against them and the Wild had just knocked out the top-seeded Colorado Avalanche in the inaugural round of the NHL playoffs. This series featured six intense and thrilling games that took many fans on an emotional rollercoaster. In the end, the Hawks won the series four games to two and had to face the LA Kings in the Western Conference Finals. The Hawks were victorious in Game 1, yet they lost Games 2-4 and were facing elimination in Game 5. They possessed a positive team morale and had support from every fan around the world. They won Games 5 and 6, forcing a final Game 7 at the United Center, which would decide who would move on to the Stanley Cup Finals. The two teams had gone into overtime and Alec Martinez ended up scoring the game-winning goal for the Kings, which closed the book on the Blackhawks 2013-14 season. I am sure many fans are devastated about this unfortunate loss, but keep in mind that this is not the end of a dynasty. The Hawks still have many successful, winning years ahead of them and this loss was a mere impediment in their path. Watch out for the Chicago Blackhawks next season because they still have the potential to bring home another Stanley Cup to Chicago.