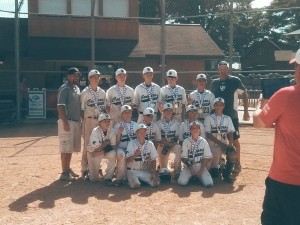 Going into the Wisconsin Dells Summer Slugfest tournament, the local Upper Deck Cougars 13u baseball team had already captured a trio of tournament victories, including a state tournament championship in Rockford, IL. Although these accolades are certainly impressive, it seemed as if the team was always looking to build upon their past wins, and earn more championships in the future. This strategy displayed a level of intensity and desire for the game of baseball, something that other teams fail to achieve, even with a star-studded roster. In their inaugural game, the Cougars were tasked with facing the Northbrook Stars, an organization that has produced Major League Baseball players Jason Kipnis and Scott Sanderson. Errors plagued the team early on, but they found their stride as the game continued, allowing them to edge the Stars with a 4-3 victory. Next on the team’s hit-list was a visit from the Chicago Mudcats, a team that the Cougars had yet to face in the regular season. Offense overshadowed a usual philosophy of defense and pitching, as both teams erupted for run totals that nearly touched double-digits. In the end, however, Upper Deck found a way to plate more runs than their opposition, and a 9-8 win was the result. With a 2-0 pool play record, the Cougars advanced to the quarterfinals, where they buckled down and let their opponents score no more than three runs in each game. They bested a talented Illinois Crunch team 7-2 and were off to the semifinals to face the Lake County Stars, a team that finished second in league play and made a semifinals appearance in an Omaha, Nebraska tournament. The game was seemingly one-sided, as the Cougars’ offense put up a double-digit run total, while the defense played error-free baseball, allowing UDC to cruise to a 10-3 win and an opportunity to be crowned Summer Slugfest Champions. The championship game featured the Cougars’ offense produce six runs in the second inning, leading to a total of twelve runs scored for the team, while an excellent pitching performance and flawless defensive baseball assisted the team in winning via slaughter rule, 12-1. Following the conclusion of the game itself, the Cougars were presented with their first place medals and were congratulated on a job well done by their coaches, parents, and tournament directors. A tournament championship ended a historic season for the Cougars, who finished with four tournament championships, a pair of runner-up finishes, thirty overall wins, and a ranking of second overall in the state of Illinois. Dominance is the perfect word to describe this local 13u baseball team, as the aforementioned accomplishments are feats that have been unheard of in this area, until this year. Congratulations to the Upper Deck Cougars 13u baseball team on their out-of-state tournament victory as well as their remarkable season as a whole.