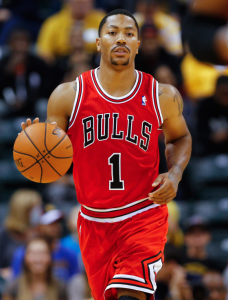 After a devastating ACL tear, Derrick Rose is beginning to participate in workouts, paving the way to his eventual return.

Nearly one-and-a-half years after tearing his ACL in a playoff game, Derrick Rose has announced that he will return to the court in the Bulls first preseason game against the Pacers in Indiana. Rose sat out all of last season recovering from that serious injury. He was medically cleared to play since last March, but has stated time and time again that he is not “mentally” ready to come back yet. That decision took a large amount of criticism from many Bulls fans and the media. He has been training rigorously to make a come back to the NBA. Head coach Tom Thibodeau has stated that Rose will play regular minutes in the preseason. Rose has mentioned that he feels 100 percent and is ready to go. When asked who was the best player in the NBA, he replied that it was still him. I predict that Rose will not have a horrible season, but I do not expect a MVP caliber type season out of him. This year will be a time for him to adjust to his surroundings and get a feel for the game again. After last season, the Bulls will need Rose to start producing a little bit to get back into the discussion of an NBA Finals victory or appearance. He is a respected and beloved figure in Chicago, and he needs to retain that image this season as well. Hopefully he will do well this season and hopefully the Bulls make a memorable playoff appearance.