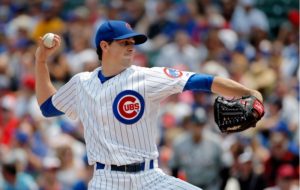 Kyle Hendricks may not have exceeded the 200 inning threshold, yet he is most deserving of the 2016 NL Cy Young Award.

Following the now irrelevant 2015 season in which the Chicago Cubs fell to the New York Mets, questions surrounded Kyle Hendricks and his ability to be an effective starting pitcher. Even though he compiled an excellent rookie season, his so-called “sophomore slump” took a toll on his overall statistics, as well as his team’s performance. His ERA nearly eclipsed the 4.00 mark in the regular season, while his postseason starts lasted continually lasted less than five innings. The belief was that Hendricks was not cut out to be a Major League starting pitcher. His fastball failed to reach ninety miles per hour, and his secondary pitches needed a tune up. Entering the 2016 season, Hendricks was projected to be the Cubs fifth starter for a second consecutive year, while others like Jake Arrieta and Jon Lester received all of the attention and hype. Fast forward to today, and Kyle Hendricks not only drastically improved his standing in the Cubs rotation, but also serves as a leading candidate to win the National League Cy Young Award.

His surprising candidacy does not focus on the amount of innings that he pitched, nor the amount of batters that he struck out. What separates Hendricks from both Max Scherzer, as well as his own teammate Jon Lester, is the fact that he led all of baseball in ERA despite failing to consistently throw his fastball ninety miles per hour or more. This statistical anomaly simply displays how much harder Hendricks had to work throughout the year to be a dominating force on the mound. Instead of overpowering hitters with a ninety-four mile per hour fastball, like Scherzer, Hendricks resorted to out-smarting his opponents. He employs a cut-fastball, which paints the corners of the strike zone, along with a change-up that dips in velocity by seven miles per hour when in comparison to his fastball. Hendricks’s bread and butter, however, is his visually impairing sinker, which changes the eye level of hitters at the last second. According to FanGraphs, this sinker accounted for nearly fifty percent of the pitches that he threw in regards to the season. Hendricks, who experienced constant problems with his sinker in 2015, found his feel for the pitch, thus contributing to the success of this year’s Cubs team.

Hendricks also received the luxury of pitching on a World Series team, meaning that he received multiple opportunities to show off his arsenal in front of viewers outside of the Chicago area. Although a near-fatal injury marred his inaugural start in the NLDS, he was able to not only contend with, but defeat the best pitcher in Major League Baseball today. In a pivotal Game Six pitching matchup against Clayton Kershaw, Hendricks stymied the Dodgers offensive threat, holding them to no runs in seven plus innings pitched. This performance allowed the Cubs to fend off Los Angeles in six games, instead of having to play a dramatic Game Seven. In the World Series, Hendricks pitched nine total innings over two starts, giving up only one measly run. Keep in mind that it was Hendricks who started in Game Seven, and despite the early pull after four and two-thirds innings, he laid the foundation for an eventual Cubs victory. In comparison to Max Scherzer, Hendricks outshines his impressive season when deciphering their postseason performances. Scherzer, the Nationals number one starting pitcher, failed to post a win in the NLDS against the Dodgers. In two starts, he gave up five earned runs, yet most importantly, his team did not produce a win in those starts. The expectation of using an ace in a postseason environment is to generate a much-needed win. Scherzer could not answer the call in his two chances to better his team’s performance, while Hendricks responded with impressive results.

I can understand the fervor behind Scherzer’s Cy Young Candidacy, as he won twenty games, limited his ERA to 2.96, and amassed a whopping 284 strikeouts. His regular season was one to cherish in its own right. However, Kyle Hendricks won sixteen games, led baseball in ERA, and delivered on a level expected by an accomplished veteran. Hendricks flipped the script on his once uncertain career in a matter of one year, and has now become a household name in the MLB. Hendricks’s contributions to his team’s success easily outpace Scherzer’s, as noticed by the Cubs and their World Series win. Although his candidacy may hang in the balance today, Kyle Hendricks deserves the National League Cy Young Award without question.