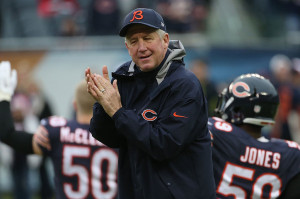 John Fox will become the new head coach for the Chicago Bears after leaving the Denver Broncos less than a week ago.

John Fox will become the first head coach in Chicago Bears history to hone a last name that also resembles an animal. Putting aside the humor, reports have confirmed that the Bears have hired John Fox to be their fifteenth head coach in franchise history, seceding Marc Trestman and hoping to lead the Bears to the playoffs from the first time since 2010. Fox brings with him an expertise in defense, which benefits a Bears defense that ranked third to last in the NFL this past season. He has a career coaching record of 118-89 over thirteen seasons with two teams, the Carolina Panthers and the Denver Broncos. Of those thirteen seasons, Fox has reached the playoffs seven times, leading the 2003 Panthers and the 2013 Broncos to the Super Bowl. Fox is one of the only coaches in NFL history to lead two different teams to Super Bowl appearances, although both of those appearances resulted in heartbreaking losses to the New England Patriots and Seattle Seahawks. Ironically, he was the coach of the 2005 Panthers who defeated the Bears in the NFC Divisional Round of the playoffs. Personally, I support the hiring of Fox because of his previous successes with a Panthers team that had nothing at the beginning and also with a Broncos team that lost key players for 2014 after putting up astronomical numbers during their Super Bowl run of 2013. This move will also solidify a Bears locker room that has been on edge since posting a 3-6 record during the heart of last season. Expectations will once again be through the roof for this 2015 Bears squad, and hopefully they will not fall short of these expectations and finish with a record exceeding the .500 mark for the first time since 2012. Fox’s defensive mindset will bring the Bears a different point of view, but I believe this change will be needed in order for this team to succeed. There should not be an occurrence during the season in which this team gives up fifty points, yet this startling point total was given up in two consecutive games last season. With Fox at the helm, this merciless embarrassment should not occur again. Although I am an avid Bears fan, by the time the Bears dropped to 3-6, I was not in the mood to even watch them play. What made last season even worse is that the Bears played five prime-time games and although they prevailed in their first two, they dropped their final three by wide margins. The team in general was problematic last year, and hopefully Fox can get this team back on track for 2015. In Fox’s inaugural season with the Panthers and Broncos, he led those two teams to a 7-9 and 8-8 record, respectively. Hopefully history will not repeat itself, and Fox will lead the Bears to a highly sought playoff appearance. This is all I am asking for at this point and I do not care whether the Bears lose in the Wild Card or Divisional Round, as long as I can make the conclusion that the Bears are once again a competitive team.