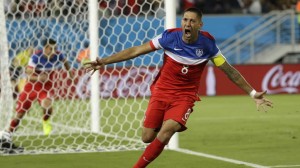 Clint Dempsey celebrates after scoring the first goal for the United States against Ghana on Monday.

The United States were and are still considered underdogs in the 2014 World Cup being held in Brazil. Although they may not have as much talent or fire-power as Brazil, Spain, or Germany, they have confidence in themselves and they have a will to win. Speaking of winning, the U.S. emerged victorious after a fierce and thrilling match against Ghana yesterday. This match gave the U.S. full redemption against Ghana after the team knocked the U.S. out of the 2010 World Cup in the quarterfinals. This match featured an all-around excellent effort by a U.S. squad that was told by its own coach that they would not come close to winning it all. The first goal of the match was scored by Clint Dempsey at the mere 29-second mark, making the goal one of the fastest goals scored in World Cup history. Yet about 33 minutes later, Dempsey was accidentally kicked in the face after going up to contest a volley. He suffered a potentially broken nose, but he stayed in for the remainder of the game. The only predicament that the U.S. faced during the match was holding that one goal lead until the end. Ghana had possession of the ball for 60 percent of the match and they shot the ball 13 times more than the United States, making it a daunting task to keep a steady grip on that one-goal lead. They were treading water and fighting to stay in control all the way until the 82nd minute when Andre Ayew of Ghana scored to tie the match at one apiece. Many U.S. fans’ hearts sank when the goal was scored. They assumed that the chance for a victory was slim and that a tie was in store, possibly even a loss. Just four minutes later, the U.S. had a corner kick right in Ghana territory and virtually all fans viewed this as a last-chance effort for the U.S. to pull out with a win. As the kick was airborne, John Brooks Jr. jumped up and scored a goal on a header. The crowd went berserk and all U.S. fans in attendance stood up and cheered. This was true revenge to a Ghana team who defeated the U.S. four years ago and now, the United States are tied for the pool lead. The next match for the U.S. is when they oppose Portugal on June 22. Keep in mind that Portugal just came off of a devastating loss against Germany so hopefully the U.S. can take advantage of Portugal’s previous loss and earn another victory on Sunday. Good luck to the Untied States on Sunday and keep checking the website for more U.S. World Cup updates.