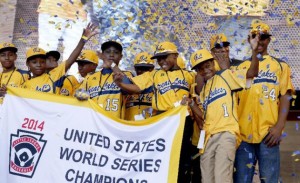 The Jackie Robinson West team that won the 2014 U.S. Championship in the Little League World Series, was recently stripped of their title as a result of allegations and evidence that some players were not from the city of Chicago.

We all stood united and supported the valiant and successful efforts made by the Jackie Robinson West Little League team that emerged victorious after a difficult bout with Las Vegas Mountain Ridge. The team captured our hearts from day one due to the class and sportsmanship they presented and the fact that an all-African American team was competitively playing baseball. Personally, I was not a true fan or follower of the team, yet this scandal that has arisen has prompted me to voice my opinion on the matter at hand. The team was stripped of their United States title as certain evidence suggested that some players on this team lied about where they lived. In Little League Baseball, a team can only contain players who reside in the boundary area that the team plays in. JRW’s boundary area was in the southern part of the city of Chicago. According to Chris Janes, Evergreen Park Athletic Association VP, the team consisted of players who resided in Evergreen Park, yet claimed to live in southern Chicago. These players used fake or alternative addresses when filling out the paperwork required to participate in the Little League tournament. After learning about this deceitful act they committed, I accept and am actually pleased with the punishment imposed by Little League Baseball. The whole point of Little League Baseball is to allow various teams to represent certain regions in the U.S. and across the world. By lying about where players live, JRW defeated the entire purpose of being able to take part in the Little League World Series. Obviously, there will be backlash to this decision, but in the end, JRW made the wrong choice and they need to live up to their forfeiture of the U.S. title. The parents and coach are primarily to blame for this scandal, yet I believe that the players knew what was going on and they too should be punished. Mayor Rahm Emanuel and other advocates of the team are claiming that the players should not feel the aftershocks of the sanctions dished out by the LLBWS. If a person were to ask each player where they are from, and their responses were unanimously along the lines of a neighborhood in Chicago, then this would prove that the players had knowledge of the situation, making them just as guilty as the parents and coaches involved. Others like the flamboyant Jesse Jackson as well as White Sox Executive Vice President Ken Williams are calling the action taken by LLBWS a discriminatory act against the African American players and adults of JRW. These statements do not make any logical sense to me and the fact that racial profiling is being brought into this scandal makes me feel as if it is a desperate plea of attention that has nothing to do with the fact that JRW cheated. The cheating is just that, cheating. Other voices should not drag race into this because JRW has committed the act of cheating and must now face the consequences of their actions. They wronged themselves and the LLBWS as well as their supporters. JRW possessed fans from the majority of the Chicago-area and were even known around the world for the near-impossible feat that they accomplished. Unfortunately, their title was tainted and the consequences of their actions are too much for the team and fans to accept. The fact that these prominent people are backing and standing up for known cheaters still baffles me and makes me wonder when acceptance will be attained.