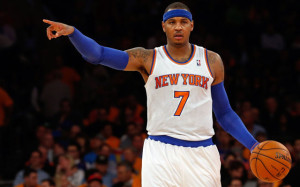 Carmelo Anthony has reportedly put the Bulls on the top of his bucket list for a possible new team to become apart of.

He led the NBA in points scored per game in the 2012-13 season, made nine All-Star teams (seven consecutive), and has a net worth of $80 million and he soon may find a new team to settle with in the Chicago Bulls. Carmelo Anthony is currently on the free agent market and is considered one of the top five unrestricted free agents available this offseason. Although the entire NBA community thinks of Anthony as a superstar player, his career stats and lack of major accomplishments prove that he may not be the best fit for a Bulls team that could soon contain their superstar point guard, Derrick Rose. To begin, Anthony has ranked in the top five for ball usage percentage every year since the 2006-07 season and he paced the league in that category during 2012-13 season. This means that he is regularly touching and controlling the basketball, which could disrupt the flow of a passer-friendly Bulls offense. The Bulls are all about scoring points off of assists and this methodology will ultimately fail with Carmelo Anthony constantly wanting to act like a point guard and keep having possession of the ball despite being a small forward. This selfish behavior could result in a breach of team chemistry and will put more pressure on Anthony to perform well when the ball is in his hands. Another startling observation is that he has never won an NBA MVP Award, which basically means that he has never really been the “best” player in the league. The lack of MVP Awards won also implies that he has never been a dominant force in the NBA. Anthony has never made an NBA Finals appearance and the Knicks did not even appear in the playoffs this past season. With the signing of Anthony, the Bulls may not win a championship with him due to the lack of NBA Finals appearances and victories that the team garners. Anthony has never been selected to the All-NBA First Team, which helps further prove the point that he should not be considered the best of the best. At the end of every season, three All-NBA teams are announced that are made up of superstar players who compiled amazing seasons on the court. A player receives a spot on a team after a special panel of sportswriters and broadcasters vote on which players deserve to earn this prestigious honor. Just this past season, Joakim Noah was recognized as a member of the All-NBA First Team and the fact that Carmelo Anthony never has made the cut should be a wake-up call to Bulls management and Bulls fans in favor of signing Anthony. He has made the second and third teams, but he has never been apart of the prominent first team. Finally, the last time that Anthony played a full 82-game season was his rookie year. He has missed 10 or more games in four seasons with the most recent season occurring in 2012-13. Anthony has a history for sitting on the bench in his Sunday-best and that should be another concern that the Bulls front office needs to address. I am speaking for every person in the Bulls community when I say that we do not wish for another Derrick Rose incident. Carmelo Anthony may look like an appealing player to sign, yet his lack of considerable accolades and narcissistic ball-handling skills may have GM Gar Foreman think twice before offering him a lucrative contract.