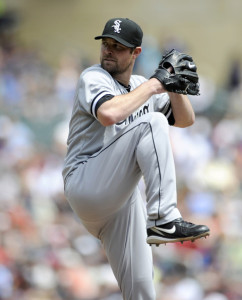 Although the term is now cliche, “brotherly love” can go a long way, even in Major League Baseball. With a homer in the fourth inning by Jordan Danks and a strong pitching outing by John Danks, the Sox prevailed against the Rangers 5-2 yesterday. According to the Elias Sports Bureau, Jordan Danks’s home run was the first time a brother had hit a home run in support of his brother since 1955 when Kansas City A’s player Billy Schantz hit a home run in support of his brother Bobby. John Danks held the Rangers to two earned runs over six innings of work to earn the win. Josh Phegley also went deep in yesterday’s game and Adam Dunn got an RBI single. Since the July 31st trade deadline, the Sox are 14-6 and have won their last four consecutive series. Unfortunately, Avisail Garcia had to be removed from the game after crashing into the wall chasing a home run from Jeff Baker. Garcia is listed as day-to-day after earlier tests ruled out a concussion. Sox bench coach Mark Parent was ejected before the first pitch was thrown yesterday. He was ejected during the pregame lineup exchange and there is no word on what he did to receive the ejection. The Sox have very good odds to increase their streak to five consecutive series won when they take on the Astros starting tonight at 7:10 P.M. Andre Rienzo will toe the rubber for the Sox as he will oppose Brett Oberholtzer. Even though the Sox are in rebuilding mode, they have not stopped their winning ways as of late. Hopefully they can win another tonight at U.S. Cellular Field. Go White Sox!