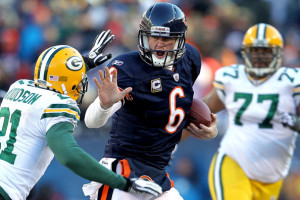 Jay Cutler trying to avoid a sack from Charles Woodson.

Jay Cutler was a promising young quarterback who made a pro bowl appearance for the Denver Broncos. When the Bears acquired him in a trade, that is where it all fell apart. The Bears gave up Kyle Orton, a second-round pick, and multiple first-round picks to receive Cutler. Many predicted the Bears to win the division and start building a dynasty to win Super Bowls. Unfortunately, the Bears have made only one playoff appearance since the trade. They have come up short in the other seasons posting a 10-6 record last season and an 8-8 record in 2011. For the Bears, it is the “same old song and dance” year in and year out. Their first half is spectacular and they usually collapse in the second half and cannot reach the playoffs. Cutler has thrown less than 4,000 yards every season on the Bears so far. Last season, Cutler barely threw over 3,000 yards and reached that plateau on the last game of the season. He has not made another pro bowl appearance since being on the Denver Broncos. His career completion percentage is just above 60 percent and has averaged 8.5 fumbles per season with the Bears. Yet, many still cheer for him and praise his every play. Yes, the offensive line has not helped Cutler in the past. This season though, there will be no more excuses for Cutler, there will not be another person to blame but himself. The Bears strengthened the offensive line by drafting Kyle Long and Jordan Mills and signing Jermon Bushrod to a five-year deal. I am just going to come out and say that Cutler is overrated. Many classify him as one of the best quarterbacks in the game, but I say he is in the middle. He is not at the top yet and who knows if he will ever obtain the top spot. Of course he may do well this season, but only because he wants a contract extension that pays big money. I would like to see Cutler consistently pass for 230 yards a game before we talk about contract extensions. Cutler has everything there for him now: an offensive line, superstar wide receivers, and a great running back. It all falls on Cutler now. Upper management and fans are expecting a playoff game at Soldier Field this season and it is all up to Cutler to make it happen. One more unsuccessful season and Cutler will not be on the Bears any longer. This upcoming season could be the end of the Jay Cutler era or just the beginning and I cannot wait to see how it plays out.