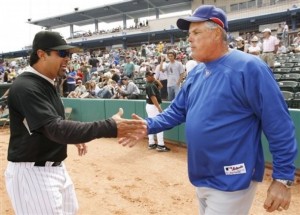 Two former Chicago managers who led their teams to greatness.

Remember when the White Sox won the 2005 World Series and made another postseason appearance in 2008. Remember when the Cubs won back-to-back division titles in 2007 and 2008. Both Chicago teams were great back then and both teams were projected to be contenders every season. Sadly, both Chicago teams are now in the cellar of their respectful divisions. The poor performances by both teams forces many fans to ponder the question, “What happened to Chicago baseball?”. That question can receive many differing answers, but here is my answer to that question. Both teams did not prepare for the future. I understand that both teams were in “win now” mode at that time, but they did absolutely nothing to assist the future White Sox and Cubs teams. At this moment, the Cubs and Sox are now in rebuilding mode and each team may not see another winning season for a couple of years. Jeff Samardzija is the only player on the current Cubs roster that was apart of the 2008 Cubs division winning team. The Cubs traded away or released every other player on that 2008 team. Now they are relying on their farm system to produce wins in the future. Paul Konerko is the only player on the current Sox roster that helped win the 2005 World Series. The Sox are also relying heavily on their farm system to hopefully produce another winning team in the future. Both teams have now restructured their front offices due to their losing seasons. The Cubs fired Jim Hendry and replaced him with Jed Hoyer as the new general manager. The Sox promoted Rick Hahn to the general manager position. I hate to say it, but both teams will need a lot more than managerial and front office replacements. Those replacements, although noteworthy, cannot fully help a team climb up from the bottom of the division. They will need the players’ will to win more than anything else. With a revamped front office, reliance on the farm system, and a “can win” attitude, I believe that the Cubs and White Sox can return to the top of their respective divisions and could possibly bring another World Series title back to the city of Chicago. Please comment your answers to the question “What happened to Chicago baseball?” and I will read them and let you know what I think. Thank you!