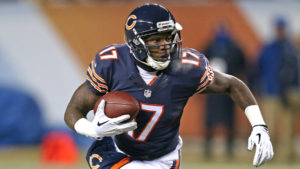 Alshon Jeffery’s seemingly optimistic comment about the Bears and their Super Bowl chances is nothing more than a gimmick.

Alshon Jeffery was, and still is in some minds, a prized offensive weapon that the Chicago Bears are lucky enough to have leading their young receiving corps. This was a player who posted back-to-back 1,000 receiving yard seasons, and even made it to the Pro Bowl back in 2013, despite starting in only fourteen games.  Jeffery was poised to match or even improve upon those stellar numbers brought forth after that 2013 season, yet the truth is that he has never come close to replicating his previous successes. In each year since 2013, he has regressed in overall receptions and touchdowns, while in the past two years, he has failed to amass 1,000 receiving yards. Of course, the argument at the forefront of Jeffery’s dip in production stems from his time off of the field, as a chronic hamstring issue and a PED suspension halted his numerical statistics. Nevertheless, it is quite obvious that Jeffery, who was hoped to become a superstar wide receiver, has not lived up to that expectation. His comments about the Bears and a possible Super Bowl victory thus mean nothing, since that statement was issued for one exclusive reason. Jeffery understands his murky situation with the Bears, and knows that his time with the team should come to an end.

Following an embarrassing loss to the Minnesota Vikings, which handed the Bears a season-ending record of 3-13, Jeffery was asked about his status as a Bear for next season, along with his thoughts on 2017. His seemingly enthusiastic reply was, “I guarantee you that we are going to win the Super Bowl next year,” while further cementing his desire to stay in Chicago for 2017 and beyond. As insane as Jeffery’s comment was, considering the team’s gaping hole at quarterback, it was stated for an ulterior reason. It may have seemed like Jeffery firmly believed in his unrealistic prediction, yet the fact is that he truly wants to improve his standing in his offseason contract negotiations. Instead of working out a contract in 2015, the Bears opted to utilize the franchise tag for Jeffery, meaning that this past season was one of extreme concern for both sides of the deal. If Jeffery was able to put up numbers mirroring his 2013 stats, he would have been able to demand a well-deserved pay increase, and more importantly, would not have to worry about his 2017 whereabouts. The Bears, in this hypothetical scenario, would have been reassured of Jeffery’s ability to act as their number one receiver down the road.

The flat-out truth, however, is that Jeffery did not perform well. His statistics this season were eerily similar to his 2015 stats, even though he played in three more games this year. Although he nearly recorded a career-low in both receptions per game and yards per game, his most startling lapses occurred with touchdowns and catch percentage. Even though Jeffery started in twelve games this season, he only caught two touchdown passes, which was an eye-opening career-low. In fact, Jeffrey’s first touchdown of the season did not materialize until Week Eight. Sure, the Bears had their struggles at the quarterback position, but at the time, Jeffrey had played with Jay Cutler for three games already. Back in 2015, he still managed to register four touchdowns while playing in only nine total games. This statistical anomaly is difficult to explain, yet easy to point out. Even when disregarding the touchdowns, Jeffery has a much larger problem that defines the very position he plays.

As a wide receiver, it is Jeffery’s job to catch passes thrown from the quarterback. Following his breakout campaign in 2013, his catch percentage, which divides the number of times a receiver is targeted by the number of actual receptions, has decreased each year. This past season, Jeffrey posted a fifty-five percent in catch percentage, representing his worst number since his rookie year. In comparison to his peers, Jeffrey’s 2016 percentage ranks about thirty-three percent away from the league leader. This essentially means that Jeffrey has done worse and worse at his job since his sophomore season in the NFL. As we all know, if a player does not catch passes, as in Jeffery’s case, then that player cannot gain yards. That might explain why Jeffrey logged only one game with more than 100 receiving yards all year as well. Although the percentage is not a popular statistics in the NFL, it indicates and explains other statistical gaffes in a player’s season. For Jeffrey, his underwhelming season, along with the past three seasons in general, could all be traced back to his floundering catch percentage.

Ryan Pace needs to take a closer look at what Alshon Jeffery really brings to the table for a team in the process of rebuilding. Jeffrey’s quote, whether sincere or not, should not simply benefit his contract situation. If he actually feels content on staying in Chicago, his stats from last season may prompt a less lucrative contract offer. What really matters is that Jeffrey’s comment, which was insincere, tried to cover up the fact that his production has taken a hit over the past three years. Instead of offering sound bites, Jeffrey needs to prepare himself for 2017, and realize that his performance will be watched with the utmost scrutiny.